At a remote unmanned level crossing in the Cambridgeshire fens, safety barriers and warning lights at Three Horse Shoes, near Peterborough, were becoming unstable and threatening to topple over.

This was due to the repeated impact and vibrations caused by the barriers as they were raised and lowered and the concrete base supporting the equipment was rotating backwards in the soft peaty soils.

Due to its remote location in the Cambridgeshire Fens, the level crossing equipment needed to be particularly reliable but gradual movement of the concrete slabs on both approaches to the rail crossing meant this could not be guaranteed.

A rapid and cost-effective solution to the problem was provided by Grundtuben, our innovative new mechanical mini-pile.

Following minor excavations next to the barrier bases, two Grundtubens, each 4.8m x 159mm, were installed to the rear of both concrete slabs. Using a machine mounted breaker they were simply driven through the soft peat soils and into the sandy loam below in less than five minutes each.

The special expansion tool was lowered inside the steel tubes to a set distance and its mini hydraulic rams then forced open the pre-split panels in the sides of the Grundtuben at two levels to secure the piles. The tubular piles were filled with concrete prior to installation of a reinforced in-situ concrete beam which connected the pile heads to the existing concrete base. Tension loadings of 20kN were achieved prior to the concrete formation.

This Grundtuben project, the first for Railtrack, was completed rapidly and efficiently and all parties involved were impressed by the effectiveness of this versatile mini pile. 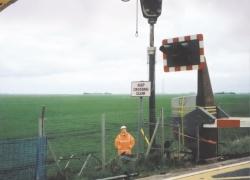 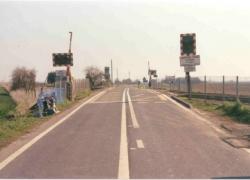