During the national tour in 1995 by ice dance champions Torville and Dean, two large re-locatable structures were erected by De Boer Structures in Poole to house a temporary ice rink and seating for an audience of 5,000 people.

In order to gain a safety license from Poole Borough Council the structures had to be secured with a suitable means of anchoring to prevent any risk of movement or wind uplift.

The two linked prefabricated structures, one measuring 100mx50m and the other 50mx25m, were constructed on a levelled steel frame base mounted on concrete pads..

Using a Montebert 125 breaker mounted on a JCB, over 130 mechanical ground cast iron anchors, with 20mm high yield bars, were then driven into the very poor quality ground at regular intervals around the arena and proof-loaded to 100kN.

Specially designed termination plates were fitted to the top of the anchors that would accept the 16mm wire cables attached to the structure.

These were then tightened using the load nut to provide a fast, efficient and cost-effective means of stabilising the structures. 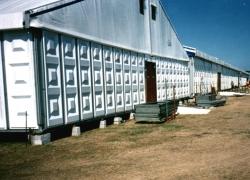 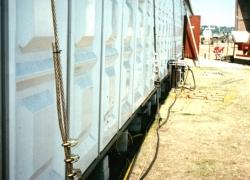