Anchor Systems were approached by Galliford Try and piling and ground engineering specialist contractor Van Elle to design a temporary ground anchor scheme forming part of sheet pile temporary works at an under bridge on the M1 junction 13 to 16 smart motorway scheme.

Ground investigation data provided by the client suggested that the anchors would be installed into made ground forming the motorway embankment, a material that can be challenging to work with, due to its varied nature. The required prop forces were defined by the client which allowed Anchor Systems’ in-house design department to select the AS-300 as the correct anchor from its range of Vulcan Earth Anchors. Once the initial concept was approved by the client, an indemnified design was provided. This identified the tendon diameter based on load requirements and the acceptable deflections of the sheet pile wall.

To validate the design, which up to this point was based on interpretation of ground investigation data, a series of test anchors was installed and tested to ensure they met or exceeded the predicted performance. Programme constraints meant that vertical test anchors had to be used, installed behind the pile line such that they intersected the stratum where the live anchors would be positioned. Under the supervision of Anchor Systems staff, four test anchors were installed by Van Elle, one at each bridge abutment, using a hydraulic breaker mounted on a 13t excavator. These were then “load locked” using a high pressure hollow hydraulic ram, achieving a maximum load of 220kN, which is greater than that achievable by other UK ground anchor manufacturers. The load information, together with details of the installation time, was then used by Anchor Systems’ design department to substantiate the original design. The final design document was then passed to the client for its review and acceptance. Following on from a successful acceptability test and geotechnical design, the systems were approved and installed successfully. 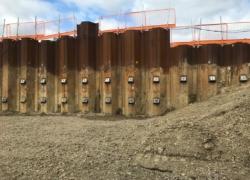 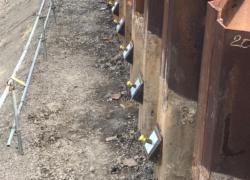 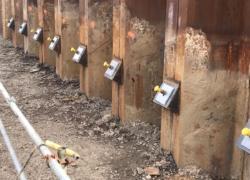 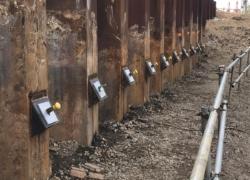 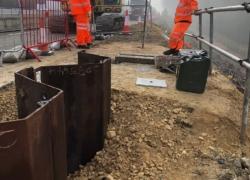 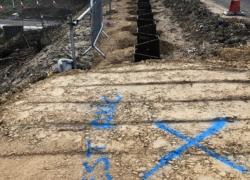 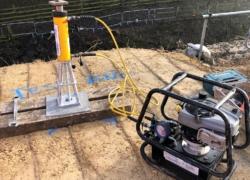 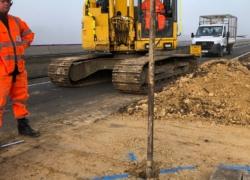 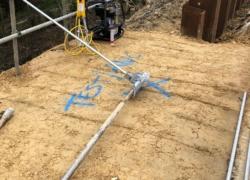