The Victorian embankment was slumping and failing as it was too steep to support itself. Granite sets began to dislodge and fall out causing more stability problems and a flood threat to houses behind the towpath. Several solutions were put forward, some of which were ruled out due to the need for cements and grouts which could have contaminated the river. Subsequently the mechanical ground anchor system was selected as the most appropriate anchor. A design life of 50 years was required in a ‘brackish’ marine splash zone.

This meant that all the components of the system; anchor, bar, bearing plate and load nuts needed to be produced in Duplex Stainless Steel grade 1.4462 to comply with BS EN 1008 and BS EN 3100. Compositional analysis, tensile strength tests, impact and hardness tests were required on all the components.

Site tests were carried out by Anchor System (International ) Ltd to determine suitability and a F.O.S. of 3 was required on the system.

330nr mechanical ground Duplex anchors were installed and these were driven to various design depths and subsequently load-locked onto a specially machined load plate and hemispherical washer with an ID tag and load nut into a recessed, precast revetment panel. The anchors also needed to be left such that they could be re-tested for maintenance purposes in the future. Each anchor was numbered on both the load plate and ID tag with the load capacity achieved. 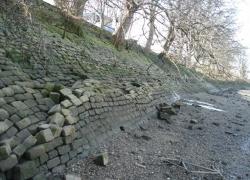 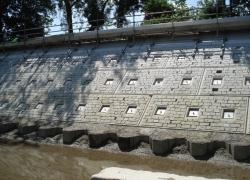 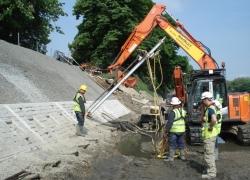 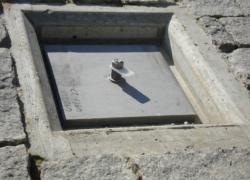 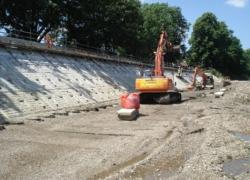 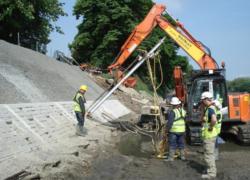 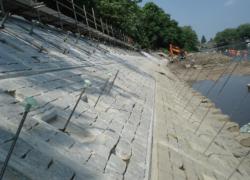 towpath5
BACK TO TOP