A large brick retaining wall, over 5m high and some 25m long, needed to be stabilised as pressure from the much higher retained ground and upper level car park was beginning to cause movement in the wall.

In addition, Medway District Council had requested that the chosen solution should have no visible external plates. This was because the wall, originally part of an old grain storage building, was a listed structure.

Having core-drilled holes in the masonry at three levels, the mechanical ground anchors were driven to a depth of 6m using a Montabert breaker mounted on a JCB. Anchors were then proof loaded to 50kN and released.

Comprising a stainless steel tube, front plate and polyester sock, the Combi-Tecs were positioned over the anchors inside the wall. The socks were pressure filled with grout to produce a mechanical and chemical bond with the structure and then left for seven days to cure.

After the curing period the anchors were re-stressed to a working load of 20kN and locked to their recessed front plates with load nuts. Excess bar was cropped off and the cored material replaced and made good. The anchors are now totally concealed in the fully stabilised wall which shows no visible signs of disturbance. 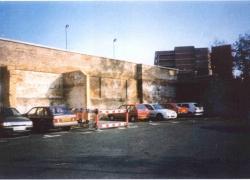 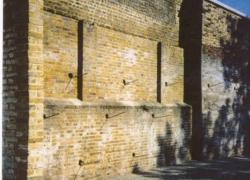