Anchor Systems were approached by Michael Aubrey Partnership Ltd looking for a suitable solution to arrest and stabilise an existing timber retaining wall.

The wall which held up part of the house owners garden was starting to fail, and this was creating an unsafe area for the homeowner. If left the wall would certainly collapse so intervention was needed.

Initial loads were given by the structural engineers at 15kN/m for mid height and 30kN/m for the lower section of the wall. Both were factored loads.

An initial test anchor was installed and loaded within the available ground conditions to verify a suitable anchor for the required loads. This anchor was driven vertically from the garden level and removed after test completion.

The Vulcan AS-30 was determined to be suitable for the mid height and the AS-50 for the lower level of the wall based on site test results.

The timber wall was initially core drilled to accommodate the anchors and then Vulcan Earth Anchors were percussion driven through the wall to a depth of 3m at a 10° incline with the use of a 1.5T excavator with breaker attachment.

Each anchor was then proof loaded, relaxed to the anchors required working load and locked off with the use of a 12t hydraulic ram and battery-operated hydraulic pump.

The entire project was completed in just two days with a two-man team. 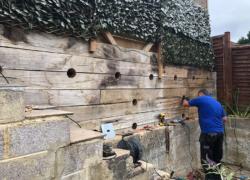 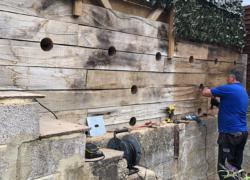 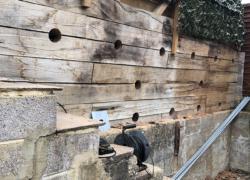 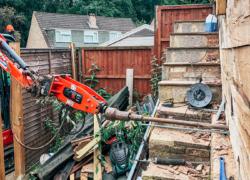 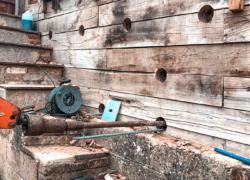 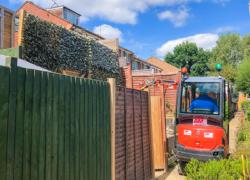 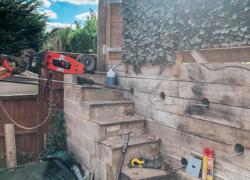 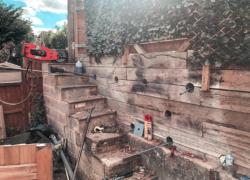 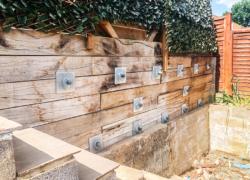 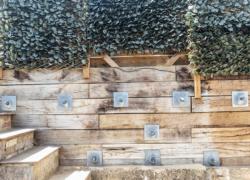