To avoid the possibility of a landslip endangering nearby houses in Nelson Close, Exeter City Council appointed Dean & Dyball to stabilise an adjacent embankment.

The ground was secured by means of geotextiles and a gabion basket wall, all anchored using mechanical ground anchors.

About half way up the 10m embankment a shelf was cut into the sandstone to allow the construction of a gabion basket wall which was to retain the soil, dense gravels and marl on the top half of the slope.

Material on the top half of the slope was stabilised with geotextile matting. This was anchored into the gravels and soil, to a depth of 1.2m, using mechanical ground geotextile anchors.

The steel mesh gabion baskets were anchored into the sandstone, using mechanical ground stainless steel anchors with 16mm high yield grip bars, before being filled with rocks to create a wall 2m high, 1m wide and some 45m long.

Anchor holes were pre-drilled by Celtic Rock Services who installed the anchors to a depth of 6m using a hand-held breaker. Anchors were proof tested to 45kN and then set to a working load of 20kN and terminated using a 400x400x10mm galvanised plate, nylon spacer (due to dissimilar metals) and load nut.

The completed project provides a fully anchored and stabilised embankment that should now pose no threat to nearby residents. 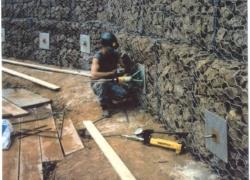 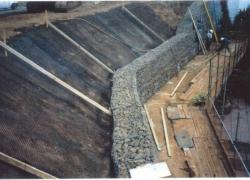