Anchor Systems (International) Ltd (ASIL) were asked to provide an innovative solution for a foundation that would be used to support the main school name signs. The paving had already been placed in all three of the locations where the signs were required to be installed. Therefore any solution was required to create minimum disruption to the newly laid walkway bricks and blocks.

The sign position was also placed on areas where there was a fall and there was a possibility that the signs may be temporary while defining the current access to the school during the final construction phase. Once the construction was finished then the main access to the school may be identified via another route. Hence the sign was required to be capable of being re-sited with minimum disruption to the location.

The geotechnical situation at the position of the sign was unknown and boreholes had not been taken locally. Therefore, it was agreed that ASIL would provide a site test to be carried out prior to installation to review the soil condition. The test Anchor Post was driven as required and a horizontal pull test was completed on the Anchor Post once fully driven to review the capacity. The loads recorded on the Site Test Report were well within capacity and capability of the Anchor Post based on interaction with the surrounding soil.

The whole operation of Anchor Post installation to final sign fixing was timed at 30 minutes. Further time was required to remove spoil from the areas of installation of the Anchor Posts. One of the signs was placed on a concrete/stone footing which allowed the use of Anchor Bolts to fix the posts to the concrete. 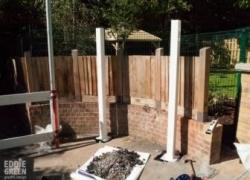 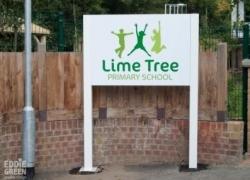 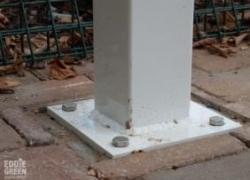