Embankment stabilisation on the M25 and the A2

On two different projects, slippage of embankments supporting major trunk roads was causing concern and the ground needed to be stabilised to avoid serious future problems.

In both cases Carillion Highway Maintenance was the main contractor and the mechanical ground anchors were specified by the project engineers, WS Atkins, because of their reliability, rapid installation and ability to accept immediate loads.

At the M25, in various zones over a 200m stretch both sides of the motorway, anchors were driven 6m and 8m into the clay substrate to prevent the embankments from slipping and rotating out.

WT Specialist Contracts used machine mounted breakers to drive in 180 of the large stainless steel mechanical ground anchors with 20mm high yield bars. Each anchor was then fitted with a 350mm load plate and set to a working load of 50kN.

The A2 project for Forward Spread (where Carillion H.M. was again the main contractor) also involved mechanical ground anchors, 60 of which were driven 6m into mixed ground conditions of stiff chalk/silt clays in two sections on the same side of the road and set to working loads of 60kN. The installation followed careful term monitoring of progressive creep tests to establish stringent load testing requirements.

Mechanical ground anchors securing the A2 embankment at Boughton near Canterbury. 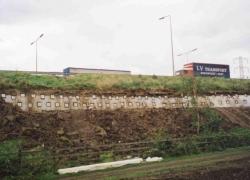 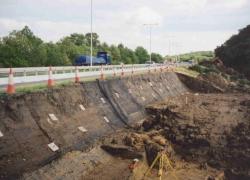