At the 2000 Chelsea Flower Show, two giant temporary structures were erected by De Boer Structures to house the main arenas for this famous annual event.

De Boer’s required a reliable, cost-effective method of securing the structures to prevent any wind uplift or movement. The anchors also needed to be re-usable as the structures are due to return for the next nine Chelsea shows.

The vast Delta System structures were erected in just seven days on very poor quality ground, consisting of original silts overlaid with rubble and a reconstructed ground. They were then levelled before a total of 46 mechanical ground anchors were installed. The AS400 is the latest addition to, and the largest anchor, in the mechanical ground anchor range, capable of accepting immediate proof loads of up to 300kN.

Each of the 5m long stainless steel anchors was driven into the ground and tensioned to a working load of 80kN. The anchors’ load plates were then bolted to the steel frames which sat on pre-formed concrete pads. After the event was over, and the structure removed, the corrosion resistant stainless steel mechanical ground anchors were capped off and concealed to enable them to be re-used for the next nine Chelsea Flower Shows. 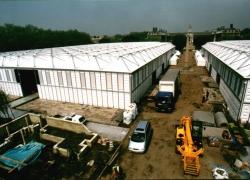